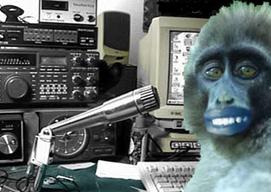 My name is Michael Davidson, DJ name “The Nut Behind the Wheel”. I am the host of
Comedy 101 Radio, a Plymouth,NH  based radio Comedy Show that plays the best Sketch,
Stand-up and Musical humor that exists on the planet.
2011 was the 20th anniversary of the show and, in my humble opinion,
it just keeps getting better.

My name is not important, I have a DJ moniker because I am trying to stay one step
ahead of the law.
I am the host of Comedy 101 Radio because I MUST have done something wrong in a past life.
I play humorous things on the show so that I can rifle through your couch and chair
cushions for spare change while you are momentarily incapacitated with laughter.
The show has certainly seen better days, if it gets any worse I may have to change to
a Sports Radio (“I think the Dallas Cowboys will go all the way this year and win the
Stanley Cup!”) or Talk Show (“I hate everyone that isn’t ME!”) format.
I live in Plymouth,NH because Vermont will not have me.